You are here: Home / Dirt Merchant Digest / Twitter As An Economic Indicator

Things that make me go hmmm…

There is an interesting article in the Saturday (Oct. 1) Wall Street Journal about the uses of Twitter data. See “Decoding Our Chatter” in Saturday’s Review section of the WSJ.

A fact of life in the wired world is that no information lives in a vacuum. The collection, manipulation, and exploitation of data is the “edge” of the cutting edge. It’s no longer the sole realm of techies in Silicon Valley either. Information gathering is now routine in the financial industry, politics, business and law enforcement. Check out the image below reflecting Twitter’s political discourse. 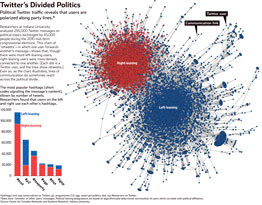 (Why is it not surprising to learn there are more left-leaning Twitter users?)

I’ve come to expect that if there is an edge to be found in anything, a hedge fund manager will try it first. It also follows that by the time we read about it in the press the edge may have already disappeared. Note the mention in the article about the $40mm fund based in London “based on the ups and downs of the national mood as expressed through key words in texts sent by 130,000 Twitter users”. The fund thinks they can exploit what they see as a four-day lead time from Twitter chatter to the stock market

What does this have to do with commercial real estate? I have no idea, yet. But I have no doubt that this is something to watch.