Reis.com is one of the premiere sources for real-time information on commercial real estate. They just released the data for multi-family, office and retail performance through Q4 2011.

Not surprisingly, the Apartment sector led the way in performance metrics. 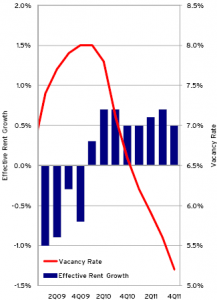 “With supply growth at a 31-year low and demand for rental units bolstered by the weak for-sale housing sector, market conditions have rarely been better. Vacancies cratered by 140 basis points to 5.2% by the end of the year, with effective rents growing by a healthy 2.3%. [N]ational vacancies continued to tighten sharply in the fourth quarter, bucking seasonal weakness typical of the colder months of the year.”

This is consistent with anecdotal reports I hear from friends across the country.

Also, early reports of 2011 multi-family transaction volume reflect strong investment interest from every level of the market, from institutional to direct owners. Expect more of the same in 2012. As I’ve been writing for some time, this multi-family cycle will have a longer duration than historical averages due to the continuing problems in the housing market, high unemployment and declining wages.

The Office sector also shows signs of sustained recovery in fundamentals. After a strong start in the first two quarters of the year there was a marked slowdown as political gridlock over the debt ceiling (and the subsequent ratings downgrade of US Treasuries)  created turmoil in the financial markets. Our own portfolio is over-weighted in the office sector and we saw the pullback in leasing activity firsthand. 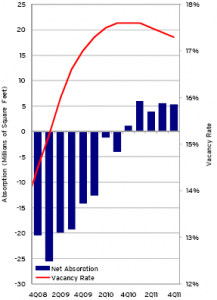 “A moderate decline in national vacancies throughout 2011 provided some reassurance that the nascent recovery of the office sector was not derailed by fears surrounding a second recession in the US. Vacancies ended the year at 17.3%, 30 basis points below the end-2010 level, reflecting the slow improvement in conditions for the office sector properties across the nation. Rent growth was also positive every single quarter, with asking rents increasing by a modest 1.6%. The sector absorbed 5.3 million square feet, the fifth consecutive quarterly gain in occupied stock since late 2010 indicted by the graph to the left. After five quarters of squeezing out gains in occupancy, the office sector has assuredly turned the corner and begun the process of recovery. Net absorption sums up to 20.7 million square feet for the year, a clear reversal from 2010’s loss of 16.7 million square feet of occupied space.”

This is a mixed bag of news, and I suspect highly influenced by geography. Job growth is extremely uneven across the country, and as many office users are downsizing as expanding. I will have more detailed information by region and property sub-type in the upcoming 2012 forecast.

Retail fundamentals displayed continued weakness, but did not decline further. This may not be sustainable as Q1 2012 will see the annual shake-out between the weak and the strong. Deep holiday discounting and declining disposable incomes contributed respectively to higher nominal sales, but at the expense of profit margins. 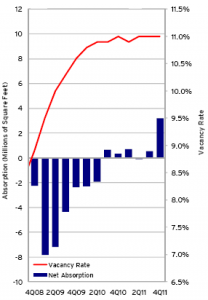 “If not for the dearth of new completions during the year, the sector would have fared even more poorly than it did. Although performance in the latter half of the year hints at the first signs of stabilization, caution is warranted until more consistent signs of convalescence emerge. […] Until economic growth, job formation and consumer confidence improves broadly; expect continued mixed results from the retail sector.”

In my view this is also a good news/bad news report. I called retail the “schizo” sector last year, and nothing has changed. The market is bifurcated between STNL (Single-tenant net lease) deals, and everything else. Those who know me are aware that I am eager for the chance to get back into my favorite category of real estate, but right now I do not expect it will happen in 2012.

Let me note that quarterly sector performance should be viewed in context of the trends over time of overall economic data, including population, employment and income data. Stay tuned as the year-end data comes in.

[Author’s Note: Okay folks, my blogging career is officially underway, but bear with me as I’ve got a learning curve to master. Suggestions, criticisms and comments are encouraged.]