Data from Reis.com indicates that the office sector continues to show slow but steady improvement and Retail continues to fight headwinds.

Office Net Absorption and Vacancy: The national vacancy rate has regressed back to levels unseen since 1993 and remains well above the cyclical low of 12.5% from 2007 before the onset of the recession. A positive absorption rate is encouraging, but indicative of the slow pace of job growth. 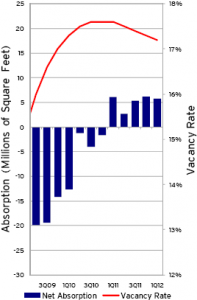 “The national vacancy rate fell by 10 basis points, to 17.2% at the end of the first quarter of 2012. The sector absorbed about 6 million SF, the fifth consecutive quarterly gain in occupied stock since the beginning of 2011. Although net absorption levels remain muted, five consecutive quarters of positive net absorption provide fairly consistent evidence that the sector is indeed recovering. “–ReisReports

My own experience mirrors the national data. Rent growth is modest, but pricing power has returned for projects with recent renovations and improvements. While there are fewer large tenants seeking new space, the ones that are will not grind the owner down to the last nickel to make a deal.

However it occurs to me that may be highly personal. I’ve lost patience with the brokers who have used those tactics in the last couple of years. In recent negotiations I’ve just declined to counter to lowball offers. That sends a message–if you want this property be willing to pay what it costs to deliver or don’t waste my time.

That said, I may soften my stance in the latter half f the year. I expect the rampant legislative uncertainty including expiration of seven tax reductions, debt reduction by sequester, an new debt ceiling battle, the outcome of health care expense increases… all on January 1, 2013, tro negatively affect activity in office and retail. Companies are already moving into a hunker-down mode until our can-kicking Congress deals with the freight train headed straight at us. 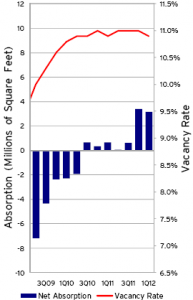 Retail continues to be a bifurcated market between STNL (Single-tenant net-lease) and everything else.

Lease rollovers from the last of the go-go years of 2005-2008 are coming due. Most of the national and regional in-line tenant deals signed then on 5-7 year primary terms. Rent concessions continue to be the order of the day.

However, Reis has more optimism than I do:

I hope they are right. Retail is my favorite sector and though I am eager to get back in the water, it ain’t summertime yet.